I'm on my third piece of furniture modelling. There was the four poster bed, the lamp, and now I'm working on a cute little William III side table.

Since I've been focusing on antiques, I'm getting a fair amount of baluster modeling practice. A baluster is a decorative post that is ubiquitous in furniture.

I originally tried baking a 16-sided cylinder, with the results looking meh for portfolio purposes where I have to be able to zoom in a bit on my props. My dubiousness at the 16-side bake had me going back and adding in-between edges to make the cylinder look smoother, which was a royal pain because it involved having to separate and re-merge the geometry, re-tie up the edges, and repeat other steps. 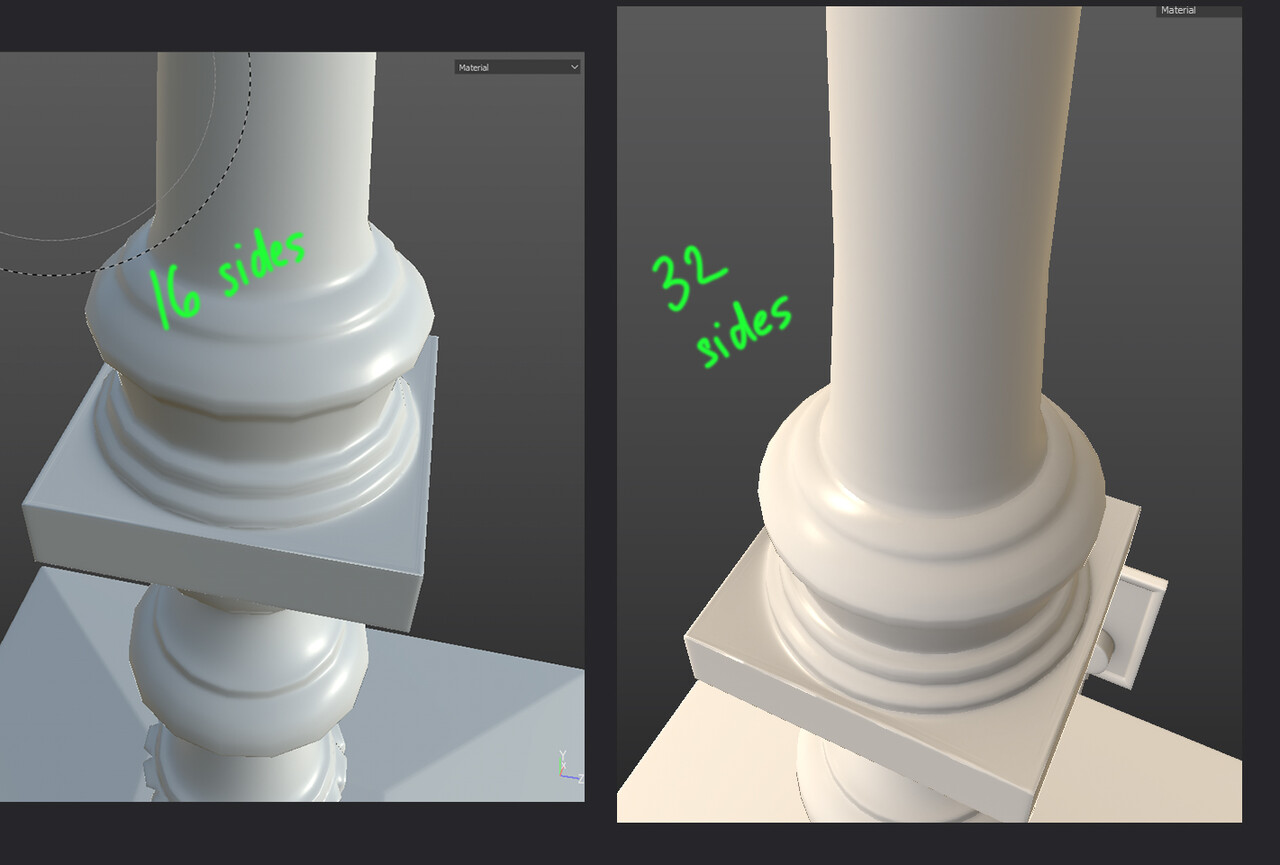 Although the cylinder was much smoother at 32 sides, I noticed something quite strange with the normal maps on the 32-sided cylinder.

The 16-side bake produced even normals, whereas the 32-side bake normals had weird striped wavy pattern to them. The below image illustrates this. It might be hard to see with the RGB version, so I made grayscaled duplicates and pumped up the contrast. 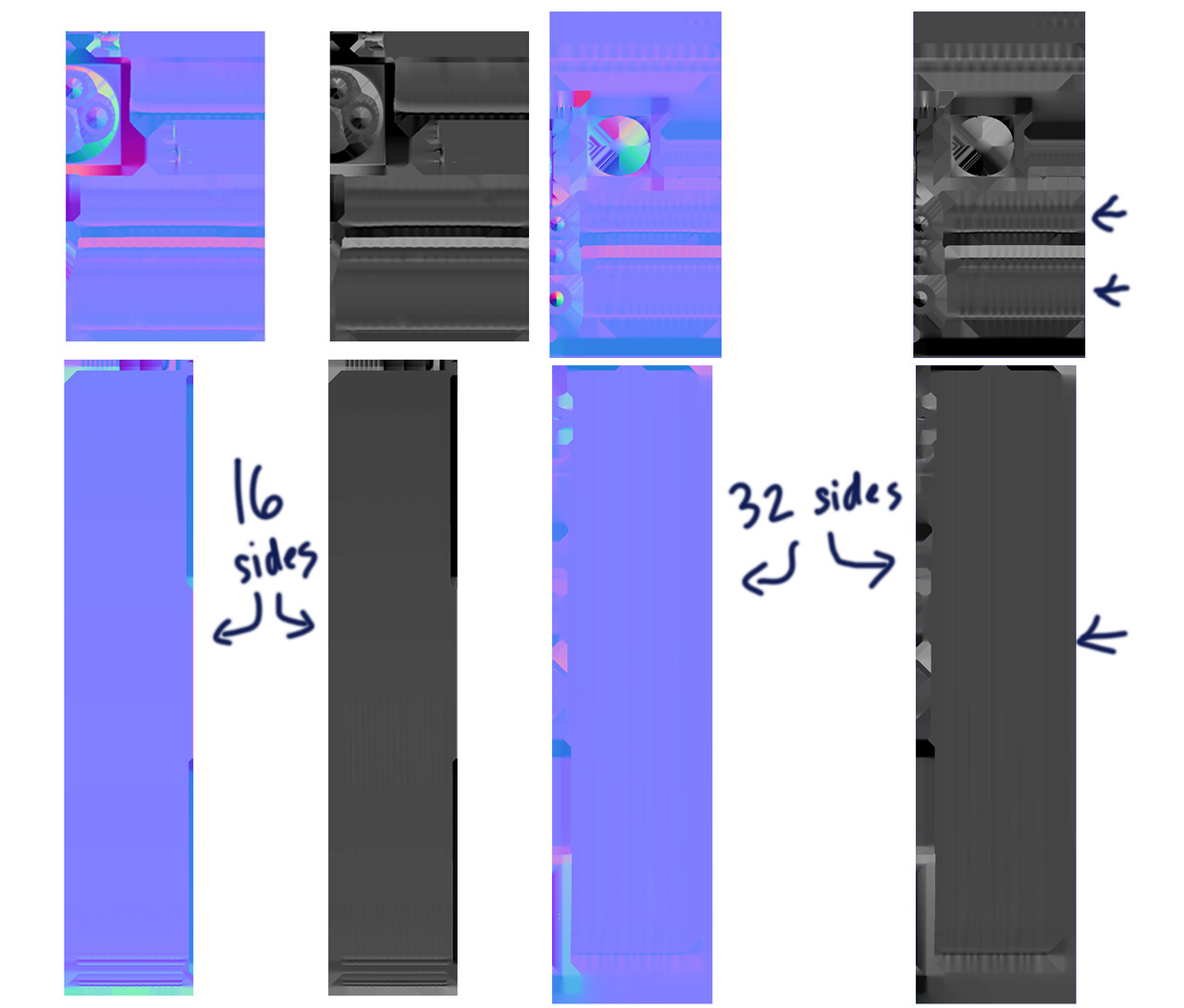 Applying just the normals in Marmoset and viewing from the side angle rather than the top-down angle, you can see that the 16-side cylinder has smoother normals whereas the 32-side cylinder has a weird wavy pattern to it. 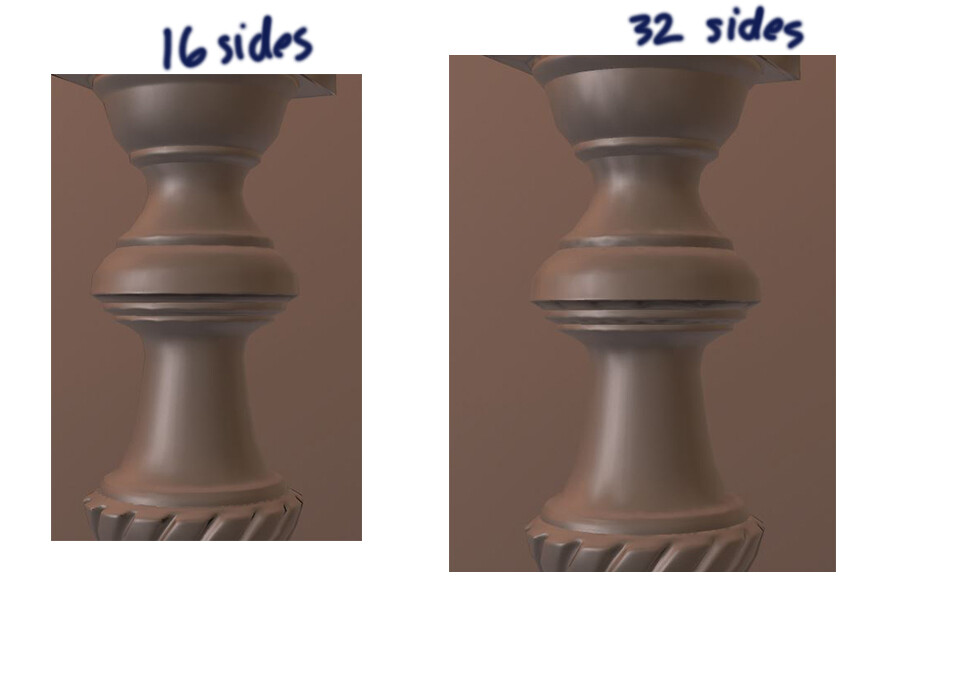 Although the PDF talks about weird normals caused by the high poly, I'm finding that mine is caused by the number of sides on the cylinder in my low poly. Basically, in my case, I had two low poly scenarios instead of two high poly scenarios. It could be a software thing because I use Maya hee Maya hoo.

I think having the additional sides looks more attractive just for the sake of my portfolio, though. I wanted the flexibility of being to take a top-down angle view without my cylinder looking faceted.

So I checked the wonky-normal 32-sided version against four different smart materials in Substance Painter (3 wood + 1 marble). Because Substance Painter lies to me all the time, I used Marmoset for these renders, and they look okay. The wavy normals do not seem to affect the lighting significantly.

If worse comes to worst and it looks very distracting in engine, I'll just fix the normals in Substance Painter. So, I'll have to wait and see until I do my final UE renders to figure out which version looks best but so far this has been an interesting learning experience.

Special thanks to Leo for sharing the Normals PDF with me - the PDF has some really cool information about other ways to achieve good normals, and I'm sure I'll be referring to it quite often.

Do you have any insight into what the deal is with cylinders and normals? Do you think this has to do with me adding sides AFTER the fact? Comment down below if you do. <3